Future Card Buddfight DREAMERS is a Buddyfight Fanfiction written by Shido, it's plan to be post at Future Card Buddyfight Fanon Wiki at 13th of June 2015, is an story about Izayoi Otonashi trying to found the past that he have long ago lost part of his memorie with his big sister Sakuya Otonashi, they have starting to discover more and more but at the same time, the mystery have become more and more dangerous...

The main male Protagonist of this story, he is unpredictable, vulgar, savage and a hopeless hedonist (quoted from himself), he is a very rude person and is not afraid of anything but his sister, with his power and his knowledge, can he found the truth?

The main female protagonist of this story, she is living with her little brother Izayoi Otonashi, is she that takes care most of the house work at home, to other people, she is more like an maid then his big sister, she is the only person that can make Izaoyi listen and do things and beat izayoi.

One of the main character of this story, she is a human come from other world, one of the star guardians, she suddenly come to this city and starting to looking for in wanted-criminal have escaped out to this city, then she have meet the problem child: Izayoi Otonashi

The Plot Below are all put in separate arc, so you can easy to read the arc you want to found.

The No：1 Problem Child Enters! Arc

It's is a boring day as always for the No:1 problem child: Izayoi Otonashi, as he have escape out of school and rest at an riverbank to try to find some fun, and with his buddy, Gundam Exia's little help, Izayoi's is able to beat a crap out of those group of bully and have a bit of fun, but soon he got bored again, after a talk with his buddy and his big sister:Sakuya Otonashi, He have received an mystery letter with an unknown sign on it turned out it's an unknown buddyfight tournament that nobody heard about, Izayai to decided crash the board of that tournament, along with Sakuya and Exia.

Chapter 4:Future Card Buddyfight DREAMERS Chapter 4: Who The Hell You Think I Am!!

The Seven Legend : The mystery seven legend that is in the city that Izayoi live in, maybe they're true, or fake.

so i will post 2 or 3 chapter at once, probably next week or at 24th of sep, because my parent decide to GET READY TO MOVE #CHECK PLACE OUT at the 19th of Sep, so i will do my best, sry to keep you guys waiting.

Cover of the Novel(s) 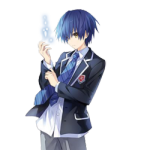