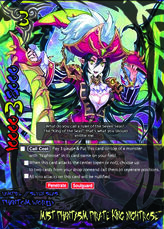 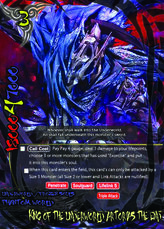 King of the Underworld, Artorias the End. 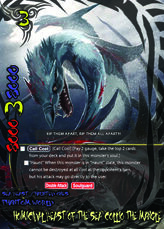 Homicidal Beast of the Sea, Collio the Mangle

This world is originally called "Phobia World" and is constantly at war, between 3 different branches of power, Seven Seas, the most tatical and dangerous of them all, lead by the Pirate King, the beautiful vampire-pirate captain, Nightrose . The Frozen Souls, the ones with the strongest offense of them all, lead by the fearsome Underworld Knight, Artorias , and the Haunted Ones, the most bloody of them all, lead by the vicious sea beast, Collio. A mysterious stranger came about one day, offering the 3 battle-fanatic siblings (Artorias is the eldest, Nightrose is the middle, and Collio being the yougest, since these 3 are adopted by the previous emperor of the Phobia World). This stranger is none other than Count Dawn, offering them a chance to change this world forever, making it in their image, for once the 3 siblings decided to make this world different from the rest, their decision? Creating an undead army, just what they've always wanted, thus, "Phantom World" is born.

Phantom World is a world that is known for bringing back the dead , making them dead again, and vice versa. This world usually has residence of pirates and other undead-theme monsters. It's flag design is like those of a skull with 2 swords crossing each other.

They are mostly 3 Attribute builds in this world, such as:

Seven Seas: A build in Phantom World that mostly have Pirate-themed skills and monsters(Mostly Human Pirates, Pirate Ghouls, and Vampires).

Haunted Ones: A build that has Ghost-themed monsters and skills.

Frozen Souls: A build that has Underworld-themed monsters and skills.

Phantom World has a unique Playstyle in calling monsters from the dropzone and into the playzone, depending on the build, the called-monster will get a unique ability to support the fight.

A Feast worth Devouring!! Gora-Tachikaze!

[Cost-Deal 2 damages on your Lifepoints and pay 3 gauge}

-If you have a monster with “Frozen Soul” In it’s attribute. The number of monsters in your drop zone that has used “Exorcise” is the number of critical damage you deal to your opponent.

[Cost-Pay 4 gauge and call 3 monsters with “Seven Seas”  in its attribute to the field, and activate “Hollow”]

All critical of your Monsters in “Hollow” becomes critical of “5”. The attack cannot be nullified if you have 6 life or more.

-This fan-made world is based on the "Granblue" clan of Cardfight Vanguard.

Community content is available under CC-BY-SA unless otherwise noted.
Advertisement