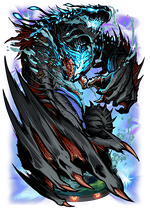 Great Dragon God of Oblivion War, Kurogane
Add a photo to this gallery

War Dragon World is a dangerous world where most of its occupants are powerful dragons made, breed and born to be on wars, thus hencing its name, it was usuallyknown as "Berserk World" but Tenbu decides to call it it's current name because of the powerful ruler of the world.

This is the exact reflection of "Dragon World", but in this alternative world, war is a lifestyle, only the most powerful of dragons can rule, That is where The Dragon God, Kurogane comes, for he is the most powerful and strongest of all the War dragons here. One night, a dragon who goes by the name "Azi Dahaka" comes and challenges the deity dragon, being bigger, stroger and more than dangerous, he defeated Ai Dahaka, but Azi Dahaka is to proud to admit it. Kurogane became enraged ad brings the whole world as his army, for in War Dragon World, the strongest is the leader, they travel through countless worlds and brings it all in desolation until he will find Azi Dahaka, and he will take his head, all 3 of his heads.

War Dragon World is a world that has a very aggressive playstyle, mostly overpowering monsters and a direct straight hit attack.

Their attributes are the same with Dragon World, but the most unique is:

Retrieved from "https://fcbf-fanon.fandom.com/wiki/War_Dragon_World?oldid=28884"
Community content is available under CC-BY-SA unless otherwise noted.